Another performance of the Summerland Suite! This time, just March, October, and May, performed beautifully by Liz Lupton, Joel Stobbe, John Suderman, and Calvin Dyck -- the instructors of the Strings the Thing 2011 workshop in Penticton last week.

Several songs from the Summerland Suite were also performed in September 2011, at a BC Parks 100 celebration in Manning Park. The thrill for me was hearing the premiere of a newer companion piece called the KVR Quartet. Thanks to Liz Lupton, Martin Kratky, Sarah Anderson and Ashley Kroecher for their time and commitment in bringing these pieces to life. We had a great weekend, and I managed to take some photos as well: 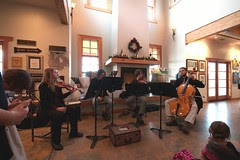 A wonderful trio of musicians joined me to perform this piece of music at the opening to my photography show at Red Rooster Winery in December, 2010: cellist Martin Kratky, violinist Liz Lupton and violinist Jasper Meiklejohn. We rehearsed once a week for a month, and it was so exciting for me the songs coming alive. Performing the suite was a real thrill for me, possibly the highlight of my creative life so far.

You can watch the videos of all six songs on YouTube.

This suite of short songs was composed to accompany a photography exhibit called Okanagan Abstracted – the music is another level of abstraction, layering interpretation over landscape and experience. Just as the exhibit’s photographs portray a unique view of the Okanagan Valley, the music takes an unconventional approach in reflecting the same place.

In Tim Burton’s classic animated film, The Nightmare Before Christmas, most of the action happens in Halloween Town and Christmas Land. In each place, inhabitants spend the entire year preparing for their respective Big Day. It’s compelling to imagine what the rest of the year is like in those places. Summerland has a similar dynamic – the Okanagan has always been all about summer in the public consciousness, with beaches and fruit trees as emblems of that brand. But what about the other 10 months of the year after the main event finishes and the tourists go home?

Each of this valley’s seasons has a vibe that lends itself to musical interpretation. Vivaldi locked up that approach with his famous Four Seasons, making any related attempt seem rather pretentious and cliché, but consider this a quirky, regional variation on the theme. I’ve chosen months to correspond with each of the songs in the suite, ignoring July and August, as they get enough attention here already.

My photographs often attempt to go beneath the surface, unearthing beauty where you might not expect it. Great photographs often let viewers assign meaning and value based on their own experiences. It may be the same with instrumental music – the lack of words creates space for listeners to experience and analyze on their own terms. If the titles and words and pictures don’t seem to match how you’re feeling when you hear these songs, please ignore them.

The Summerland Suite by Jeremy Hiebert is licensed under a Creative Commons Attribution-NonCommercial-ShareAlike 3.0 Unported License.

This is the first one I wrote from scratch as a string quartet, and perhaps the one that started the entire project...because I enjoyed it so much. I like the moodiness of it; the quiet intensity. My most complete song, and probably the centerpiece of the suite. Themes:
Recordings:
Notation:


An upbeat, major-key fiddle tune, this one may not match the darker mood of the other pieces. However, I think it needs to stay -- primarily to mix things up in the set, and also to brighten up and balance the mood. This started as one of the first fiddle tunes I composed as I learned to play violin, and just recently became a duet to try with Ivy. I think it could be pretty rollicking and fun with all four instruments. Themes:

The Eastern European vibe in the middle of this one evokes a Hungarian wedding or something of that sort. I wonder if the viola part has watered that down too much, but maybe that's ok. To fit with Stutter, it would probably make sense to keep the speed up. There are some fast hammer-on sort of bits that are passed back and forth between the violin and viola that I don't want to lose when more gets added. Themes:
Recordings:

More of a jamming loop than a true song, but I'm still happy with my progress on this one. It started as my viola recital piece in 2009, and ended up turning out much mellower and more melodic than I had expected once the other three parts were added. The viola carries the main flow of the tune, with the violins offering meandering harmonies that shouldn't overwhelm. My favourite bit is when the viola stops and hands the main "riff" to the cello, both in the middle and in the ending.Themes:
Recordings:
Notation:

This quirky one was originally written in F for the 5-string viola, then turned into a viola-violin duet that Ivy and I performed at her spring recital. I was never very happy with the violin part, and Ivy never warmed up to it. But I think it has potential as a quartet piece, paired up with a spooky cello-driven follow-up that I've already added a nice viola part to -- both in C minor with a dark shuffling rhythm. Themes: Halloween duality, creepiness and mortality, mischief and fun, quirky playfulness.
Recordings:
Notation:

This started out as a solo viola piece in the summer of 2009, then morphed into a duet with Liz for my recital in June 2010 -- video of that performance here. It's a bit weird, starting in 6/8 with some slight tempo changes, then switching to 4/4 and racing until a slowdown for a melodramatic climax. Modifying this for quartet treatment hasn't been as easy or fun as I had hoped, yet I'm happy with where it has gone. In same ways it's my most accomplished piece. Themes: dark and cold, creative intensity, time for introspective exploration, new beginnings, reflective and forward-looking, hope...

I started writing little solos for viola or violin last year, some of which morphed into duets. Then came a string quartet -- I've always loved string quartets -- and it was so fun that I thought I'd see if I could write a bunch of them for a little set, just in case I could ever assemble a few interested string players who were willing to learn some new music.

After a summer of sometimes painstaking work and obsessive attention to detail (which does not come naturally to me in other areas of life), I've finished six songs that seem to hang together pretty well. I think there's a common thread to them, with enough variation to keep things interesting if they're all played together, but it's impossible for me to be objective about this. I know these are beginner compositions from someone who hadn't touched a violin two years ago, but I'm proud of what I've accomplished in a relatively short amount of time.

Now that the suite is done, I've been pondering what might be the most fun way to have it performed. When I started this site up early in the process, I plunked in some of my photos at random, then realized it might be pretty cool to have a selection of photos projected on screens or walls while the music was being played live. A sort of multimedia expression of my last year of creative process, in event form. Probably too ambitious, but I'm stewing on it.

A note on titles -- I'm lost. If I go with "The Summerland Suite" as the label for the set, then I'm thinking I should rename the songs along an Okanagan theme of sorts...especially if the accompanying photos are local scenes as well. Feedback welcome on that concept.
Posted by Jeremy 3 comments: